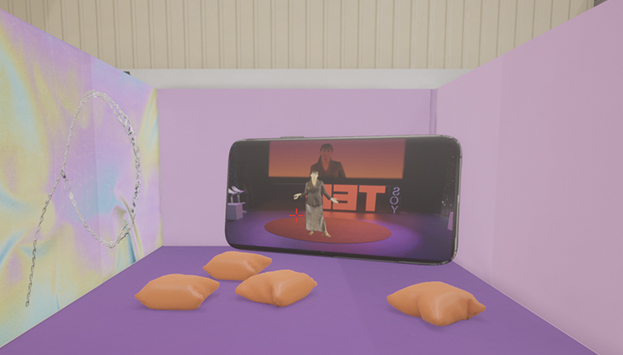 WITHOUT THE NET, THE CHEMICAL SOUP IS LIFELESS

Ephemeral is a site-specific programme that works with installation projects that fill the space of the Italian pavilion in Montjuic. Seeking the interaction of the public with the pieces, it concentrates above all on the specificity of the space it occupies, being materiality, light or sound the elements with which it develops. This year should be no exception, but with the singularity that the space in which the Swab 2020 is located is a virtual space.

The artists participating in Ephemeral this year present specific works for this virtual space, designed to be performed in a web environment and experienced through the screen of your iPad or computer. Therefore, it is not a question of adapting the installation works to the virtual format, but of interventions thought in the specified of the digital environment and the tools that it offers us. At the same time, they seek to generate reflection and critical thought on the effects that this setting has on the ways of working, of relating to each other and to the works; effects that have a direct impact on the dynamics of work and on the works themselves. The programme aims to reflect on how this situation affects artists working in Barcelona nowadays, on the working conditions and how they are affected by a greater presence of interactions in the virtual environment as a result of the isolation and social distance we have been forced to create as a consequence of the recent social and health crisis.

Blogger Affair is conformed by a video and an installation, part of the phenomenon of the rise of the Internet as a means of work and dissemination, as dynamics of transformation of the modes of work in contemporary hyper-visibility. Located on the virtual stand of the fair, it responds to the shift towards digital platforms and virtuality, the same place where the critical perspective it proposes is directed, both from the aesthetic and plastic language, and in the content of research based on experience itself.

Based on the premise that “artists and influencers are not so different”, the artist Maria Alcaide becomes “the materialist” influencer. She displays strategies and gives typical advices of ‘the show society’ and the world of hypervisibility, tips for surviving in a world of followers, branding and success. Blogger Affair is a criticism that uses its own media and records of what it criticizes, in the manner of institutional criticism, transferred to a TedTalk, a video clip and the forms of an intimate viral diary typical of the character. At the same time as the artist performs the cultural worker, in the framework of what Richard Florida called the “Culture Class”, dressed in the overalls of the shipyards of the port of Bilbao before the cultural hub, she speaks to us, between seducer and trickster, of the daily reality implied by the dynamics of precarisation and self-exploitation in which young artists live and work.

The installation reproduces a comfortable space, with careful lighting and pleasant colours, which transfers the tone of the video to the exhibition space, and includes one of the elements of the fashion collection of the influence that appears in the video, a piece of cheap jewellery in the form of a necklace of pendants with the word “underpaid” decorating the ornament with bright letters.

In a space invaded by vegetation, Paula Bruna tells us about the coexistence between the vegetal kingdom and the social and cultural life. Paula Bruna’s work takes as a reference concepts of ecology and ecological economy and shows the fragility of this cohabitation that often enters in collapse, being this a central element of her work. The idea of collapse, can lead to ruin and catastrophe, but also to the emergence of new forms of life and coexistence where new structures appear.

Often her work material are seed crops that imply a very specific attention towards the cure of living organisms and a reciprocal relationship with the context where it is located. The work presented by Ephemeral is an account of previous experiences of work in artistic institutions where, beyond the environmental conditions of the exhibition spaces, the exhibition of her work reveals the difficulty of plant survival in a hostile environment, both environmentally and by the apparent misunderstanding between two ecosystems: the artistic and botanical. Fragile and vulnerable, the crops collapse, thus revealing a certain situation and functioning of the exhibition space.

Despite the impossibility of growing plants in a virtual environment, in the poetic form that is a signature in her work, plants invade the fair space, and once again point out the consequences of these transformations, and of life in constant danger. If there is life after death, it is in a virtual space, and, as Haskell would say, it is not eternal.

The work of Eulàlia Garcia Valls generates a conceptual overlap between the virtual space of the fair and the artist’s workplace; through the transfer of an architectural element of the workshop, the partition that separates her workshop from the one on the side to her residence in Hangar, to the stand that has been assigned to her. A partition wall is a thin wall that serves to separate and distribute an interior space, it is a delimiting and non-structural element, and it does not support any weight. The presence of the partition in the virtual space loses its architectural function, turning it into a sculptural object that reminds us that architecture, in virtual space, fulfils different and more ambiguous functions. The virtual architecture of the stands and the artistic intervention share the function of recreating and simulating their reference.

The intervention also includes a sound piece, the recording of the sound of the artist’s work space that coincides with the idea of recreation and also points out the absence of environmental elements: air, sound, temperature… The contrast between the exhibition space and the work space makes us think of the collapsing distances… as if the possibility suddenly opened up that the other side of the partition wall of the workshop was the exhibition hall, or that behind the partition wall was the artist’s workshop. We could even think that this is a proposal that can only exist precisely on the virtual world, in which the partition is to both places at the same time.

Get to know the workplace where Ephemeral artists think, live and create their work on our Vimeo Channel.

10 minutes x 3 processes are ten-minute capsules where you can get to know the work spaces of three artists from the Ephemeral program of the Factories of Creation of Barcelona: Fabra i Coats, Hangar and La Escocesa.